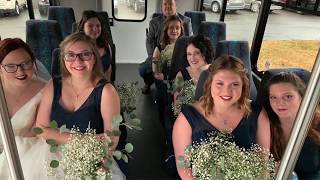 If you live in the south, you've probably heard of Chattanooga. I was born and raised in East Tennessee, Knoxville area. Chattanooga is a short road trip away, in southeastern Tennessee, in close proximity to the Georgia state line. You could probably say it is my favorite Tennessee city!

My sister-in-law has lived in the Chattanooga area since she moved away for college. She gave birth to our very first niece, Ansley, in 2015 and we've made countless trips since her arrival. We've explored the city, nature, ate some of the best food in town, and so so much more. The city is filled with wonderful art, good music, an amazing history, and some good booze!

Chattanooga Whiskey is on the list of booze to try in Chattanooga! Launched in 2012 and even changed prohibition-era distilling laws in Chattanooga so they could distill their whiskey in the city. This alone makes this company memorable. They opened a micro-distillery in downtown Chattanooga for tours and tasting, which I've seen all over Instagram and seems extremely successful. Then bought a car dealership on Riverfront Pkwy which they use for their headquarters, production facility, and have even transformed the old showroom into an event space for private events.

I learned about this space from my sister-in-law, Lauren. Who was, at the time, recently engaged to Aaron. Aaron is actually a long time friend of Tim, one of the founders of Chattanooga Whiskey. They played in a band together, watched their children grow up together, and ironically enough were even neighbors in Southside Chattanooga. The event space only had one wedding scheduled when they got engaged and seemed like the perfect place for these two to tie the knot.

Lauren asked me to assist in planning their wedding and I was so excited! We went to view the venue and I think its safe to say we all immediately fell in love. It's a large event hall, claiming to hold up to 300 guests. Lauren and Aaron were expecting roughly 150, so this was plenty of room for exactly everything they needed and wished for in a venue.

One of my favorite parts of the venue was the bar and I couldn't wait to decorate it to the nines. It's already beautifully styled and doesn't need much. A beautiful copper bar top with amazing industrial styled bar stools. It has a large chalkboard hanging on the wall behind the bar which Lauren most definitely wanted to take full advantage of and it turned out so gorgeous. The exposed beams give the whole space such a unique look and I envisioned hanging roses. When I saw the finished look, I was shocked at how amazing all of the details came together!

When picking out what drinks they were going to serve they wanted a variety but also wanted to have signature cocktails, which got me excited to find a name for these drinks. I sent over the idea of Southside since they were both currently living in Southside. They responded with the idea to name Laurens cocktail Northshore and Aarons cocktail Southside since that's where they were living when they started dating. Keeping this whole wedding very Chattanooga based was so much fun!

We even took advantage of the exposed beams to create a faux wall out of sheets for a holding area pre-ceremony so no one would see Lauren before she came down the aisle and it came together seamlessly.

While planning for the big day we were anticipating a flip, post-ceremony. During the flip, we were going to have all of the guests head outside for a cocktail hour under the large covered loading dock at the venue. This seemed like a perfect place. However, as we got closer to the day we were watching the weather closely and they called for a slight chance of rain. As we started to go through the motions we were either going to have to buy a ton of umbrellas for guests to walk to the loading dock, which seemed a little extra.. or keep all guests inside while volunteers helped us move chairs and pull out pre-decorated tables, which actually ended out working beautifully and our ceremony to reception flip time happened in about 15 minutes! If they had any more guests this option probably wouldn't have worked, but the guests moved straight to the bar and immediate family and friends got to work switching everything over.

We wanted to incorporate the barrels as much as we could. They were on display as soon as you walked in, in the ceremony backdrop, and even used them as bistro tables with the bar stools from the venues bar during the reception.

A toast was something that was important for Lauren and Aaron, they wanted all of their guests to be able to participate. So as guests arrived they were greeted by pre-poured champagne, to prepare for the toast. The bartenders provided a refill for anyone who needed mid-ceremony and everyone was prepared for the final kiss!